St. Joseph’s Rural Resource Training Centre (RRTC), as it is known today, has undergone several changes and rendered varied forms of services in the past. The land was an estate belonging to a company which tried to grow tea. As tea did not prove successful, Fr. Joseph Arokiasamy was offered the land for a pittance and about 600 acres of land was acquired by him in the 60’s. Fr. Felix Bollini, together with some boys doing their middle school, looked after the farm for some years. Fr. Francis Cheeramben (CJ) was appointed to see the possibility of starting an agriculture school. From 1976, the house became a semi-aspirantate, meant for the post-matric students as a preparation year before joining Plus 2 at Savio Juniorate. From 1978 till 1986, it functioned as semi-aspirantate for Classes VII and VIII, due to lack of space at Savio Juniorate.

By 1981, with the help from Misereior, the work on the infrastructure for Agriculture Training Centre was completed. Since, the proposed Agricultural School did not prove to be viable (no boys came forward to study agriculture), ways and means were thought out to make it a high school with agriculture as one subject. But the Board of Education did not approve the proposal. So the institution began to function as a normal high school with boarders. Due to the location of the school, it did not attract many day-scholars; the students being very few, soon the school proved to be non-viable. In 1991, it was decided to phase out the high school and to begin Agricultural Training Centre. In the same year the Centre got it registered with the Registration of Societies. The high school section continued for few more years. Simultaneously some agricultural training programs were introduced in a small way and various attempts were made to make the farm productive. In 1996, the Centre began active collaboration with Bosco Reach Out and different training programs were conducted. In February 1999, the high school section ceased to function and Bosco Reach Out began to play an active role by converting it into a full pledged Agricultural Training Centre. In 2000, it was renamed Rural Resource Training Centre (RRTC) involving the collaboration of the Government as well as other NGOs. The official inauguration of the Centre took place on 25 May 2000 by the Chief Minister of Meghalaya. In 2002, the Centre obtained the rank of Rural Technology Park. From 2002, RRTC began to function as an autonomous body legally delinked from Bosco Reach Out. From 2004, RRTC began to introduce Agricultural Extension Projects in rural areas. The Centre drew the attention of many by hosting the Don Bosco Tech India Seminar in 2005. The vision and dedicated work of Fr. Mathew Payapilly (1999-2006) made RRTC a well recognized institution. In 2007, RRTC became a member of DB Tech India and SKIP. In December 2008, the Regional Seminar on Food Security was held at RRTC. In August 2009, the State Bank of India inaugurated its Rural Self-Employment Training Institute (RSETI) at RRTC.

Recently it has introduced some innovative areas such as building and construction industry, tourism and hospitality, cooking and restaurant keeping, carpentry, welding and dovetailed with EDP programme. For the entrepreneurs, RRTC sees to the establishment of backward and forward linkages, forms them into SHGs, Federations and Cooperatives for up-scaling of volume of products, value addition and marketing.

The Extension programs of RRTC consists of on-field projects for promotion of sustainable livelihood and food security spread across thee district of Meghalaya namely, Ri Bhoi, South Garo Hills and Jaintia Hills.
RRTC is also a model farm for exposure and demonstration in the area of natural resource management, water conservation, land management, integrated farming, horticulture, spices cultivation, appropriate technologies, renewable energy and livestock farming and its maintenance and ensuring sustainability is an important aspect of its work. RRTC being a resource centre, ensure production and supply of inputs such as seeds, saplings, young animals and fish fingerlings, organic manures and pesticides and other farm related products for farmers.
The most recent and the specialized programmes being undertaken at RRTC are Rural Self Employment Training Institute (RSETI) by State Bank of India, Supply of Quality Planting Materials in collaboration with North Eastern Hill University (NEHU), Vocational Trainings with the collaboration of Don Bosco Tech India, and Promotion of village Industries in collaboration with Khadi and Village Industries Corporation (KVIC).

RRTC functions with the support of a dedicated group of over 60 staff members consisting of farm managers, supervisors, project coordinators, field staff in the extension projects, support staff and trainers. In addition to these, there are over 80 skilled and unskilled workers involved in various activities o the farm. Thus, RRTC envisions evangelization through development and development through empowerment of people. 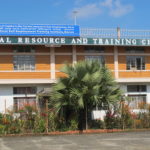