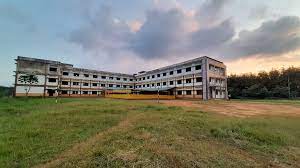 Baijalbari is situated in the Khowai sub-division of the West Tripura District of Tripura State. It is about 50kms from Agartala town and 11 kms West of Khowai town. There are dozens of villages around Baijalbari. The majority group in the area is Debbarma and there are some families of Munda group. In the year 1990 some young people of the area who studied and knew of Don Bosco Educational Institutions of Shillong began to talk about inviting Don Bosco Society to the area. Eight families of the locality expressed their willingness to donate land for Don Bosco Institution. In 1991 the land donation process and the mutation of the land was done in the Revenue office. Around 20 acres of land was donated to Don Bosco Society. It took some years to get the good will of the Bishop to allow the Salesians to start a centre at Baijalbari. In the year 2008 (1st September) when the parish of Mandwi was opened and placed under the care of the Salesians, the area of Baijalbari, which was then within the territory of Moharpara parish, formed part of the new parish of Mandwi.

In 2009, Fr. Thomas Lakra, who was the parish priest of Mandwi, opened a school and hostel for boys and girls at Baijalbari. The infrastructure was very simple (sheds built of wood and tins). The school and the hostels were managed by lay persons, under the supervision of Mandwi parish. Fr. Paul Panachickal was sent by Fr. Joseph Almeida (ING Provincial 2006-12) in 2010 to be in charge of Baijalbari centre. Fr. Paul reached Baijalbari on 17th May 2010. Fr. CV George accompanied Fr. Paul and stayed with him for few days. There was a small shed of tin roof, which became the residence of the confreres. In the month of June Bro. Benedict Sangma reached Baijalbari. At the time of the arrival of Fr. Paul, there were 125 students in the school from class nursery to class V. Few months later Cleric John Mathias Marak took the place of Bro. Benedict who left for higher studies. Soon Bro. Martin Basumatari too was sent to look after the school. Bro. Martin was at Baijalbari for few months and then he left for medical treatment and eventually left the congregation.Fr. Juel Ekka, soon after his ordination, reached Baijalbari on 24th January 2013. He was appointed Headmaster of the School.

THE GROWTH OF THE SCHOOL AND THE HOSTELS

The school and the hostels continued to function in the Assam type structures, constantly renovated. The number of students in the school increased year by year. A tragedy struck on 04th May 2013; a devastating storm brought down the hostel sheds and the makeshift school structure. Fortunately, the children were at home for vacation and so no casualty took place. There are number of private hostels around the centre. The children from the private hostels attend mass and other functions at Don Bosco Centre.

Foundation was laid for an RCC school structure before the division of the province. Some construction materials were acquired. Foundation was laid by Fr. Paul Panachickal on 22nd May 2011 in the presence of few parishioners. The work began under the supervision of  Fr. Davis Aricatt, Economer of ING. The work reached almost the plinth level on one side and came to a halt towards the end of the year 2011. The workers left the place and no steady group of workers were available for quite some time. Then the division of the province took place. The construction work resumed in October 2012 with the initiative taken by Fr. George Maliekal (Provincial) and the Council of INS. Fr. Paul showed great interest and enthusiasm in resuming the work.

Since the beginning of the new province of Silchar, a dialogue had begun with Bishop Lumen Monteiro of Agartala regarding the possible erection of Baijalbari as a Parish. Bishop showed willingness and the Provincial Council of Silchar officially requested the Rector Major for permission to open Baijalbari as a Salesian Parish. Rector Major granted permission in November 2013. Bl. John Paul II was chosen as the patron of the parish. The new parish was officially inaugurated on 27th April 2014 (the day of the canonization of John Paul II). Fr. Paul Panachickal is appointed the first parish priest and Fr. Juel Ekka, the first Assistant Parish Priest. The Parish makes steady progress with number of adult baptisms every year, thanks to the hard work and the enthusiasm of the confreres and the collaborators.

Soon after the creation of Silchar Province, discussions started to get a group of sisters at Baijalbari. Fr. Paul Panachickal showed great enthusiasm for getting the sisters at the Centre. Fr. George Maliekal (Provincial) took initiative in contacting the SCV (Sisters of Charity of St. Vincent de Paul) Mananthavadi (Kerala). Sr. Primosa (Superior General) and the Council agreed to start a convent at Baijalbari to share in the pastoral ministry of the Centre. The first group of SCV reached Baijalbari on 10th April 2013. Sr. Ancita was the Superior General at the time of the arrival of the sisters. St. Vincent de Paul Convent was inaugurated on 08th June 2013 by Bishop Lumen Monteiro in the presence of Fr. George Maliekal, Salesian Provincial. The first group of sisters consisted of                  Sr. Vincenza (Superior), Sr. Pushpa and Sr. Theresa. An Assam type house was built by    Fr. Paul to house the convent. The sisters built the convent and the hostel for girls at their own expense on the plot of land freely made available to them by the Salesians. The newly constructed convent and the girls’ hostel was blessed on 23rd January 2016.

Don Bosco Centre Baijalbari was established in 2011. It has a Parish ministry, CBSE School (Elementaryand Secondary) and Hostel for boys.

BAIJALBARI in the Photo Gallery