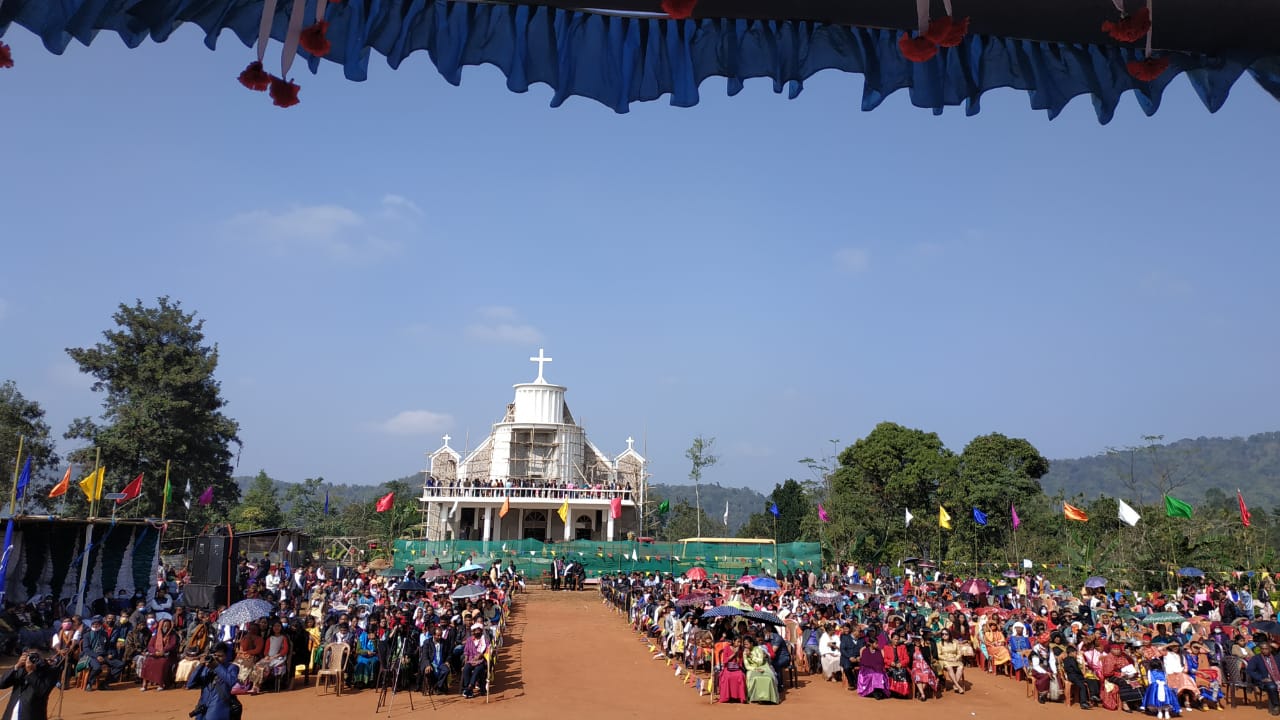 BRIEF HISTORY
Lum Sinai Parish, Umden, carved out of Nongpoh Parish, is a testimony to the growth of the Catholic Church among the people of Ri Bhoi. The Catholic community around Umden traces back its origin to the visits of Fr. Constantine Vendrame. In 1929, Fr. Vendra traversed through the dusty paths of Umden to visit nearby villages. Two years later, it was in 1931, that Fr. Vendra came decisively to Umden as the herald of Good News. During this visit, on 22 April 1931, a group of 29 people including the Doloi of Umden and his family received baptism from the hands of Fr. Vendra. The Doloi donated a piece of land for the construction of the church (the location of the parish church today). The continued visits of Fr. Vendra brought in more people to the Catholic Church. The Catholic community, formed part of Laitumkhrah Parish first, then of Mawlai and from 1950 belonged to Nongpoh Parish.
On 21 April 2004, Fr. Roland Kharkrang was sent to Nongpoh with a clear mandate from the Provincial to ‘prepare Umden’ to be a Parish. On 28 May 2006, at the Platinum Jubilee celebration of Catholic faith at Umden, the Parish of Lum Sinai, Umden was inaugurated. Fr. Roland was appointed as its first Parish Priest. Fr. Leonard Kharkongor reached Umden on 19 January 2009 as the first Assistant Parish Priest. In July 2009, at the transfer of Fr. Roland, Fr. Stephen Kharbani was appointed Parish priest. The Parish grew in number and in other services in the past years. The School at the Parish Centre is upgraded into Higher Secondary (Arts) in April 2017. Additional school buildings are being built up.
There are 42 villages in the Parish area, out of which 23 have Catholics. Two major ethnic groups in the parish area are the Khasis and Karbis.

THE SISTERS AT UMDEN
In 1989, the Visitation Sisters of Don Bosco (VSDB) opened the Sacred Heart Convent at Umden and began to look after the school and do varied ministry in the nearby villages. In 2013 the VSDB Sisters were withdrawn from Umden by Archbishop D Jala. One of the reasons for the withdrawal of VSDB from Umden was to make their sisters available for the new mission opened in Africa. In 2013 Archbishop D Jala invited the Fatima Sisters to Umden. They served the mission only for one year, after which they withdrew from Umden for reasons known to them and to the Archbishop D Jala. In 2012 Archbishop D Jala had invited the SD (Sisters of Destitute) to open a dispensary and for other services at Marmaiñ. The first group of SD sisters arrived at Marmaiñ in 2014. At the departure of the Fatima sisters from Umden, the Salesian Province of INS sought the assistance of SD Sisters at the Parish Centre. The community of SD Sisters began to serve at Umden (Parish, the School and the Hostel for the girls) from 2013. In February 2017 a formal agreement is arrived at between the SD Sisters and the Salesian Province of Shillong that the project of the construction of the Community Health Centre at the Centre will be completed by the Salesians and it will serve as the Convent, Girls Hostel and the Community Health Centre, all under the care of the SD Sisters. It is expected to be functional by October 2017.
Various lay associations like Seng Rangbah, Seng Kynthei, Seng samla and other Apostolic groups are active in the Parish. Plans and projects are being drawn up for the construction of proper Parish infrastructure.

UMDEN in the Photo Gallery