The 10th Successor of Don Bosco in Shillong Province 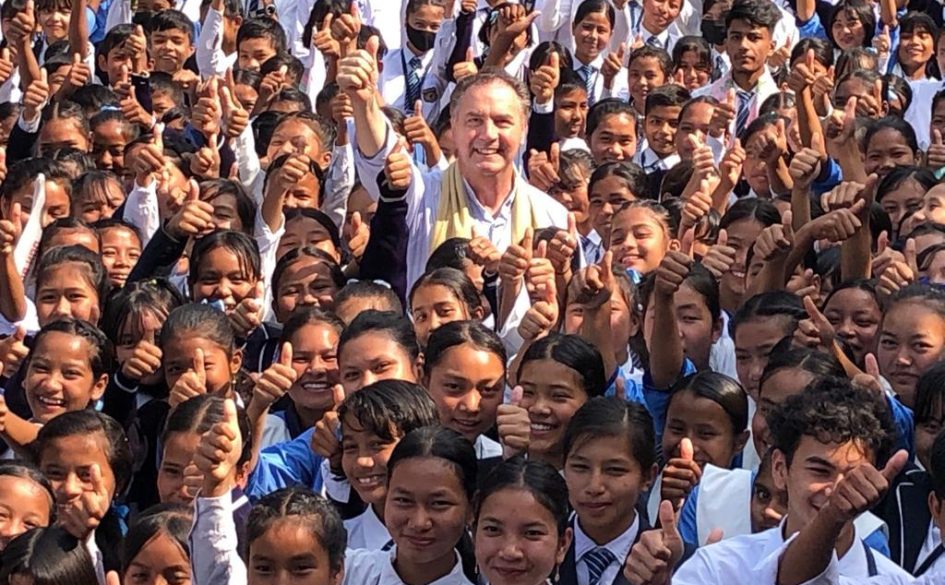 Shillong, 27 October: The Rector Major, Fr. Angel Fernandez Artime arrived in the St. John Paul II Province of Shillong on 27 October 2022. He is on a four- day visit to the province for the celebration of the centenary of the arrival of the first eleven salesian pioneers who set foot in the pristine soil of the North East India way back in 1922. On entering the land of Meghalaya the Rector Major was first welcomed by the parishioners of the Assumption Parish, Nongpoh. He addressed the gathering of young people, members of the various religious institutions in and around Nongpoh. He invited everyone to be happy always and growth stronger in faith. Continuing his journey to Shillong, the convoy took an enroute to Don Bosco Aspirantate at Nonglakhiat where the Rector Major was warmly welcomed by the young aspirants, the future of the Province. He challenged them saying: “It is no point for you to be here if you don’t have a close relationship with Jesus”. He further encouraged them that it is their turn to be missionaries.

Finally, at around 4pm amidst joy and cheer to the sound of the Savio Juniorate Band, the Rector Major arrived at the Don Bosco Provincial House, Mawlai surrounded by the confreres and members of the salesian family. In his speech at the Provincial house, the Rector Major looked forward to many moments of togetherness. He mentioned that it is a unique moment in history and further added that it is a moment of thanksgiving for the spread of the Kingdom in this part of the country. He recounted the toil and challenges endured by the missionaries and considered it an extraordinary work. He in turn reminded everyone present that it is their turn to share the goodnews to everyone.
Fr. Angel Fernandez then met the council members of the Salesian Province of Shillong at the provincial house and then proceeded to the Sacred Heart Theological College (SHTC), Mawlai for the meeting with the Salesians.
The conference began with an Evening Prayer followed by the official logistics of the gathering. In the meeting, a special welcome was accorded to Fr. Alfred Maravilla the Salesian General Councillor for the Missions by Fr. Paul Olphindro Lyngkot, Provincial of Shillong. Fr. Philip Barjo, the Rector of SHTC gave a bird’s eye view of the community with a total number of 90 students of Theology.
Rector Major was edified at the huge representation of the Salesians for the gathering. In his talk to the gathering, he noted that the whole Salesian world looks up to the South Asia Region with joy. He cautioned them that they must not lose two things namely: the name of Don Bosco which is so special to the region and they must not lose the poor from the purview of their mission. Rector Major specifically told the students of theology that they do not need to search for anything but the poorest youngsters.
He further went on to say that unless a Salesian has a heart that is warm, one cannot be a true salesian. A true Salesian he said burns with passion for the mission of the congregation. Another challenging statement made by the Rector Major to the gathering is: In the last 3 years out of 3000 SDBs only two opted for the mission ad gentes; it is a salesian sin. He encouraged them saying that Don Bosco had few confreres but sent 13 missionary expeditions. So they too in turn could give freely what they have received freely from the 406 missionaries who have worked and toiled in this part of the continent.