SAVIO JUNIORATE in the News 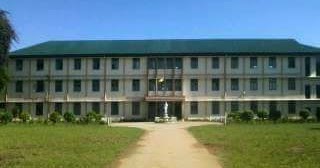 Soon after the creation of the new Salesian Province of Guwahati in 1959, Rev. Fr. Anthony Alessi (Provincial 1959-1964), together with the Council, thought about the possibility of opening an Aspirantate. To this end, a plot of land was bought in Mawlai in 1960, and in November 1961 the foundation stone of the new Aspirantate was blessed by the then Apostolic Nuncio to India, Most Rev. J.R. Knox.

Though the building was incomplete, the first staff consisting of Fr. Joseph Dal Broi (Rector), Fr. Elias Kerketta (Counselor), Bros. Karthikapallil Thomas (KJ), Joseph Forte and Kochupurackal Thomas (KA) (Assistants), moved in by February 1962. A few boys from the various mission stations of Assam arrived in the second week of February. But the big group of aspirants came from the Aspirantate at Bandel. They reached Shillong in April 1962. But the building was not ready to accommodate them. So, Fr. Mario Porcu, the then Rector of Don Bosco, Shillong and the Economer of the Province, set aside for the aspirants a section of the Don Bosco house. The aspirants stayed at Don Bosco for six months. The need for shifting to the permanent home of the Aspirantate was keenly felt by all. Though the building was far from being complete, 11th October 1962 was fixed as the date on which the shifting would take place. Thus began life at Savio Juniorate, the first Salesian Aspirantate in this mission field.

Fr. Aloysius Ravalico, it was his foresight, dynamism and love for the congregation that brought this institution to its reality. He wanted it to be a home that would be the source of vocations for the Salesian work in Northeast India. The following decades would bear out the wisdom and foresight behind the plans and the actions of Fr. Ravalico. Savio Juniorate will ever remain a living testimony of the zeal for souls of this pioneer missionary.

Savio Juniorate was started as an Aspirantate cum Prenovitiate and continued to be so up to 1986. It was home for boys from Class VII to Class XII and the pre-novices. Life at Savio Juniorate became the most cherished memory of numerous Salesians who passed through its portals. It was indeed and continues to be so a nursery of Salesian vocations. At Juniorate, it is all about the best of Salesian joy and family spirit; the air is full of music, band, and all that defines Salesian life. In 1986, when the new Prenovitiate house, Bosco Mount, Rongkhon, Tura was begun, Savio Juniorate was recognized as an Apostolic School (Class VIII-X).

In 2013, after the creation of INS Province (2012) Savio Juniorate became the Apostolic School (IX-X) and the Aspirantate (Cl XI-XII); Class VIII was dropped. From 2017 once again the boys of Class VIII were admitted. On 8th September 2016 foundation was laid for a separate Aspirantate (Cl XI-XII, Post matric) at Madan Nonglakiat (Umroi). From February 2018 Savio Juniorate became only the Apostolic School (Cl VIII-X) and Madan Nonglakiat (Umroi) became the Aspiranate (Cl XI-XII-Post Matric).

SAVIO JUNIORATE in the Photo Gallery