HERMA in the News

ORATORY DAY CELEBRATION AT BOSCO HOME HERMA
Shillong 23rd May: The last day of the Sunday Oratory of the Pre-novices of Bosco... 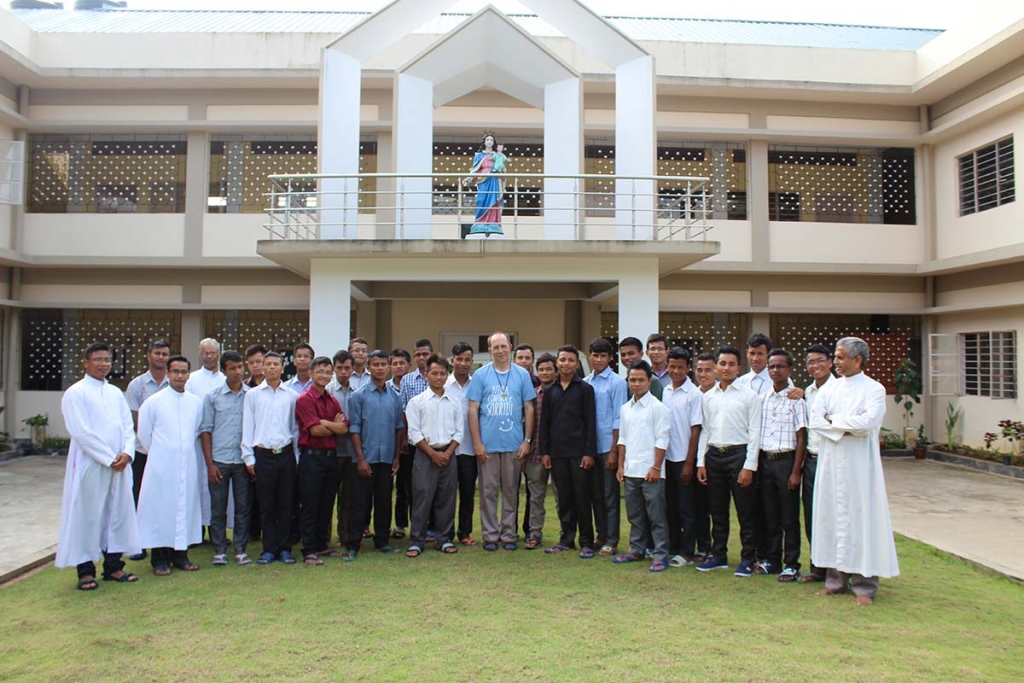 In the context of separate Prenovitiate formation envisaged by the Ratio (art 329), the Province of Guwahati had made several attempts to find a suitable place for it. Mariamnagar served as the Prenovitiate house of the Province from the year 2007. On 26th May 2007, three of the first batch of pre novices reached Mariamnagar. Fr. Jeevan Kishore Lakra, the first rector of the Prenovitiate house at Mariamnagar accompanied them. Fr. Ronald Venadt, the Parish Priest of Mariamnagar welcomed them. On 28th May 2007, the rest of the group reached. On 01st June 2007, Fr. Mackley Gomes, the administrator of the house, reached with two more pre novices, adding up the total number of the first batch to twenty.

On 05th June 2007, Fr. Jeevan Kishore Lakra was installed as the first rector of the Prenovitiate House and on 06th June the batch of 20 pre novices was initiated by Bishop Lumen Monteiro of Agartala. Fr. Joseph Almeida, the ING Provincial was present at the function. Besides the academic lessons proper to the phase of formation, the Prenovitiate are introduced to apostolic activities through the Sunday ministry in the nearby villages.  Fr. Jeevan Kishore Lakra continued to be a Rector till 2013. In May 2013 Fr. Blasius Kujur was installed as the Rector. In May 2014 Fr. Edamattathu Thomas was appointed Rector of Mariamnagar. Fr. Ronald Venadt remained on as Parish Priest till 03rd July 2016, when the mission was handed over to the Vincentian Congregation.

Since the creation of the new Province of Silchar a discernment process was initiated to find a more suitable setting for the Prenovitiate House. Several places were examined. Finally in April 2014 the Provincial Council chose HERMA under Bishramganj Parish as the location for the new Prenovitiate House. The land was already in the possession of the Province since 2006-07. It had a school with classes up to Class IV functioning there, under supervision from the Parish.

The Foundation for the Prenovitiate House was blessed by Fr. George Maliekal, Salesian Provincial, on 08th December 2014. The building was completed, blessed and inaugurated on 26th May 2016 by Bishop Lumen Monteiro. It is named BOSCO HOME - HERMA. Fr. Edamattathu Thomas, who was the Rector of Mariamnagar since May 2013, continued to be Rector of Herma from May 2016. The first batch of Confreres of the Community consisted of: Fr. Kunnamkudath Thomas (VR, Pr), Fr. Thyrniang Hubert (Adm), Fr. Vazhamplackal Mathew (Teacher) and Cl. Siangshai Matheus (Practical Training). The first batch of Prenovices numbering 22 began their course on 03rd June 2016.

After a series of discussion with Bishop Lumen Monteiro, in the context of the transferring the Pre-novitiate community to Bosco Home Herma, it was decided to return the Mariamnagar Parish to the Diocese. Bishop Lumen invited the Vincentian Congregation to administer the Parish. After satisfying all the formalities, the Parish was handed over to the VC officially on 03rd July 2016.

HERMA in the Photo Gallery