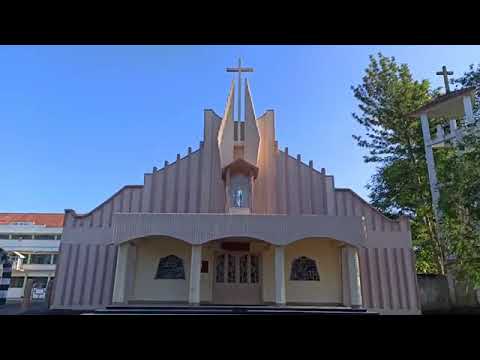 Brief History
In the history of the Catholic Church in Northeast India, Raliang Mission occupies a significant chapter. After the arrival of the Salvatorian missionaries in Shillong in 1890, the second mission centre opened was at Raliang in the Jaintia Hills. In 1891, a group of men from Mawkyndeng village went on a delegation to Shillong to invite the Catholic missionaries. A catechist was sent at first and in June 1892 a group of thirty people were baptized at Mawkyndeng by Fr. Angelus Muenzloher. On 3 December 1892, Fr. Johannes Gruchot and Fr. Thaddeus Hoffmann, two Salvatorians who arrived from Germany two weeks earlier, reached Mawkyndeng. They were the first resident priests of Mawkyndeng. A bamboo hut served as the residence and the chapel. Fr. Hoffmann alone took over the direction of the Mission after the Easter of 1894 as Fr. Gruchot was transferred to Silchar. In 1897, the Salvatorian sisters opened their convent at Mawkyndeng. The Mission opened an orphanage (boarding) for boys and girls and a dispensary to care for the sick. The earthquake of 12 June 1897 destroyed the chapel and other infrastructure that was nearing completion. Due to hard work and fatigue, and under the attack of influenza, Fr. Hoffmann passed away on 13 November 1903. Fr. Bernardin Jung succeeded him in directing the Mission.
The outbreak of the World War I brought sudden end to the Salvatorian missionary work in Northeast India. The missionaries, both fathers and sisters had to leave Raliang in 1915. In the following years, the essential pastoral needs of the faithful at Raliang, Lamin and Nongbah were taken care of by a Jesuit. In 1922, at the arrival the Salesians of Don Bosco under the leadership of Mgr. L. Mathias in Shillong, the group consisting of Fr. Giuseppe Hauber, Fr. Giovanni Deponti, Bro. Mario Calzi and Bro. Agostino Conti was assigned to Raliang. On 11 February 1922, the group left Shillong for Raliang. At the initial stage, due to frequent changes of the missionary personnel, the mission work suffered. Fr. Giovanni Mazzetti, who reached Raliang in December 1922, served the Mission till the end of 1930. He did much for the growth of the Catholic community. Fr. Cinato succeeded him. In 1935-36, Fr. Fiori Di Benedetto and Fr. Dominic Farina reached Raliang. Fr. Denis Troncana joined the Mission after the death of Fr. Farina. In November 1937, Raliang had a new superior in the person of Fr. Albert Correngia. The Agricultural school and other elementary schools in the villages got organized better, thanks to the hard work of Fr. Correngia. After the departure of Salvatorian sisters in 1915, the RNDM sisters served the Mission with great dedication. The World War II brought serious difficulties for the Mission. In 1942 itself, Fr. Correngia and two other missionaries (all Italians) had to leave Raliang. Fr. Mellino and Fr. Vigada were sent to substitute them. The War ended in 1945 and in the same year Fr. Correngia returned to Raliang. Fr. Herman Laarhuis and Bro. Michael Minar joined soon.
In the post-Independence years the evangelization work extended to several villages; number of baptisms increased; new Catholic communities were formed; and more new schools were opened in the villages. Some of the valiant missionaries who worked in the Parish in the post Independence years and have gone to their eternal reward are Fr. Virgil Albera, Fr. Elias Tome, Fr. Joseph Arminana, Fr. Sonny Fernandez and Bro. Sungmur George. The Parish and the School owe much to the dedicated work of Fr. Ugo Turco, Fr. Kuttala Paul, Fr. Kuttikadan Paul, Fr. Panna Cornelius, Fr. Thekkekunnel Jose (TA), Fr. Thomas John, Fr. Mundaplackal John, Fr. Alphonse Malngiang, Fr. Kalariparampil Francis, Fr. Ioanis War, Fr. Oravumkachalil James Mani and Fr. Kharkongor Leonard. In 1992 the Salesian Community obtained the canonical recognition under the patronage of Mary Immaculate.

RALIANG in the Photo Gallery