Salesians in Northeast India Concludes Centenary Celebrations of their Arrival 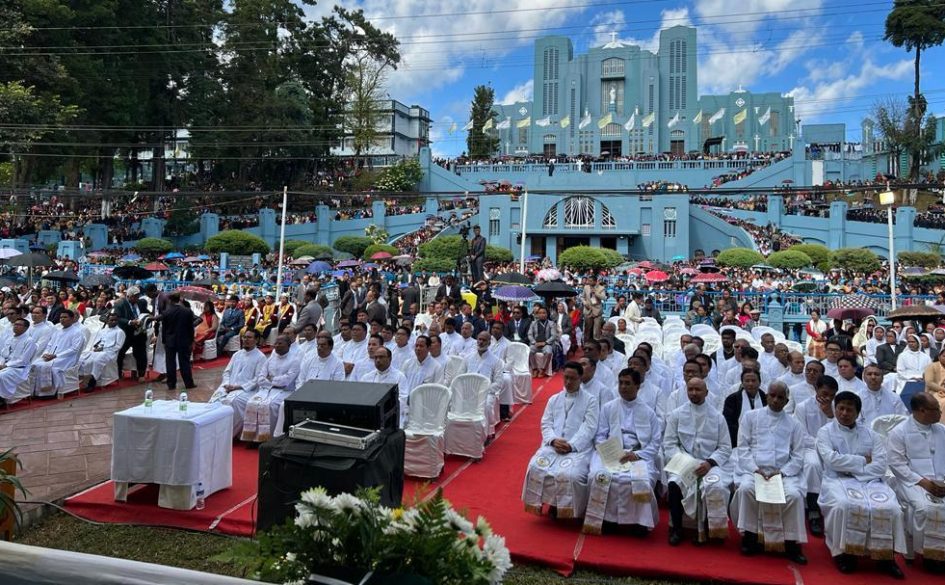 Shillong 30th October: The three-year-long celebrations of the centenary of the arrival of the Salesians in Northeast India ended on a high note at the Calvary of the Cathedral of Mary Help of Christians with the Holy Mass celebrated by the Apostolic Nuncio to India and Nepal, His excellency Archbishop Leopoldo Garelli, in the presence of more than one lakh faithful and around four hundred priests from the three Salesian Provinces and other diocesan and Religious Congregations from North East.

In his homily, the Apostolic Nuncio appreciated the enthusiasm, creativity and vigour of the youth under the leadership of the Salesians. The Nuncio said that the faith of the people of NE India is deep and fervent. He also urged the congregation to pray to God that he may make the young people instruments of His peace. Turning his face to the delegates from the different parts of Northeast India, the Nuncio said, “You can make peace in the world.” He concluded his homily by saying, “We are here today to thank God for their mission to Go and Proclaim. Now it is our turn to Go and proclaim. You young people must go on social media to proclaim to other young people about Christ and peace”.

After the Holy Mass, as customary, the head of the Salesian Congregation, Rector Major Father Angel Fernandez Artime expressed his gratitude to the Nuncio and the Archbishop of Shillong Archdiocese and the Salesian Family members and the faithful. The Rector Major said, “I am Grateful to God for the Centenary of the arrival of Salesians of Don Bosco to Northeast India. We cannot forget what God has done for us here in the Northeast right through the great missionary works of Salvatorians, Jesuits and others who paved the way for us. I am grateful to the Apostolic Nuncio and especially to His grace Archbishop Victor for declaring this year as a year of gratitude. I am grateful from my heart for the message of the gospel that has spread all over here. As we conclude the centenary may I invite the Salesians to continue to work arduously for the welfare of the young people”.

In the afternoon a Gospel concert with the theme Go and Proclaim-an afternoon with Jesus marked the conclusion of the Centenary celebrations. As many as four choirs, duets and solos took part in the Gospel concert led by the Unite For Christ youth group. The Gospel concert ended with the Adoration of the Blessed Sacrament to thank God for the 100 years of Salesian charism in Northeast India. After the Adoration service, there were firecrackers and the Provincial of Shillong Province Father Paul O Lyngkot declared the celebration closed, after which a high-decibel jam session by the youth was held to end the day.